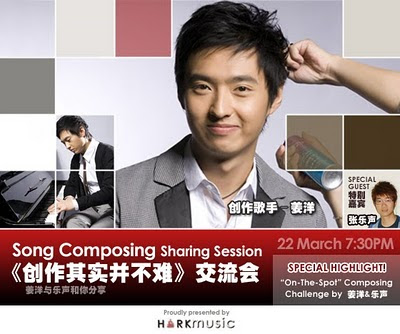 Hark Music is proud to present a song composing sharing session for an up & coming singer-songwriter – 姜洋, Jiang Yang.
Other than to impress you with his powerful vocal performances, he will also be sharing his composing experiences and knowledge gained through the years.

Jiang Yang recently released his debut album and has achieved more than 10,000 record sales within a week of release in China. Last week, he was invited to perform in 新加坡e乐大赏》at The Float@Marina Bay on 13 March 2010, alongside with regional stars 陈奕迅, 梁文音, Olivia Ong, JJ林俊杰, ,韩国组合SHINee, 蔡健雅, 林宥嘉, and many more.

With the vast experiences of these 2 composing talents, you will doubtlessly be enlightened & inspired during this 2-hr session.

***SPECIAL HIGHLIGHT!***
There will be an ‘on-the-spot’ challenge where they will compose a song (complete with melody & lyrics) together!

Come and witness this incredible feat!
Make a date with us and get inspired by these 2 talented musicians

Jiang Yang started learning music at a very young age. Wih his excellent piano skills, he started taking part in many competitions and went through many obstacles that caused him to evolve from a passionate young musician to a refined singer-song writer.

Not only being the producer of his album, Jiang Yang composed 4 of the songs and had written lyrics for 7 songs for his debut album <将。阳> which received very good comments from critics.
His debut album was released in China on 19th January 2010 and has achieved over 10,000 copies within the first week of its release.